Top Posts
Your Blog Content: Meat and Potatoes or Parsley?
How to Get Your Guest Post Published on...
30 Most Influential Bloggers and Website Owners of...
8 Week Ultrasound: The Moment Of Truth
Traxxas Spartan RC Boat – 50+ MPH on...
How To Get Free Products To Review On...
Breed More Comments On Your Blog Article
13 Lucky Free Web Content Management Systems for...
The Goal Of A Blog Post Is Conversation
39 Reasons Why You Suck
ReviewsTech Reviews

For the past year, I have been using the Anova Sous Vide Precision Cooker for steaks, chicken, pork and vegetables as one of my main cooking methods at the house. Now it is time to weigh in and let you guys know what I think of the Anova and how it compares to other sous vide cookers out on the market.

What is Sous Vide?

First, what is sous vide? It is basically a fancy word for cooking in a heated bath of circulating water. The method has been around for decades (especially in steak houses) but the technology for it used to be really expensive. Over the past couple of years, several companies have come out with affordable sous vide options for the house that range anywhere from $80 to $400 dollars. However, most of the sous vide cookers fall in the 100-175 range.

The basics of this cooking method is simple. You place whatever you are cooking into a sealable bag, get all of the air out through water immersion or vacuum and then place the bag in the heated water. You can use just about any container that works but the food grade plastic containers tend to work the best. The food then cooks in the bag to the exact temperature of the water. So what does this do?

This is why steak houses have been using the process for so long. They can have steaks waiting at the perfect temperature and then sear them to serve without worrying about over cooking or variances in meat delivery at the table. Everything is consistent and perfect every time.

Now that we have the process out of the way, let’s talk specifically about the Anova Precision Cooker. The process of sous vide is the same so all of them are basically a heat pump that circulates water. It really comes down to the extra features of the price that sets each apart.

The Anova I am using is actually last year’s model. Outside of some visual and size changes, it is 100 watts less than the current Anova Precision cooker. This just means it might not heat up the water as fast as the newer version. Outside of that, everything else is the same and it works with the same app.

A Note on Wifi vs. Bluetooth Connectivity

Personally, I wouldn’t get any sous vide cooker without Wifi connectivity. You can save some money going with bluetooth only but one of the main features of sous vide cooking is that you don’t have to be right by your food monitoring it all of the time. With Wifi connectivity, you can leave the house and still extend the timer on the cooker if you need to. I have run into this several times running to the store or just running behind getting home to the cooker. Since you can’t overcook your food, the ability to add 30 minutes if you need to is a major feature that you shouldn’t go without.

General Use with the Anova Precision Cooker

With our Wifi version, setup and use is incredibly easy. Anova was one of the first to go mainstream with affordable, at home sous vide cooking so their app development and setup are top notch. All precision cookers are setup physically the same. You plug it in, drop it in the water, connect it to the container and turn it on.

The smartphone app is really where the Anova’s do a better job than the rest of the competition. There are a lot of features and a complete community that shares recipes and cooking tips/tutorials. You can get cheaper brands that do not have any app associated with them but that seems to take a lot away from the ease of use. With the Anova app, you can start the cooker right in a recipe and it will do all of the settings for you. This makes things super simple…especially when you are trying something new.

Anything in the 900 – 1,000 watt range heats up the water very quickly. One pro tip though, if you fill the container with hot water from the faucet…your heat time is cut dramatically. If you are going to be doing really large cooks using containers like a cooler, you might want to consider a pro version with a higher wattage. The volume of water can drastically effect heat up time.

It is a little thing but the Anova does come with a really nice box that can be used for storage. It comes with a plastic liner and the box itself is coated. If you end up with some water left in the tube…it will not destroy the box in the process.

So what are you getting with the Anova that makes it worth the little bit of a premium?

It really comes down to the smartphone app development, Wifi connectivity and a strong, reliable pump. They do things like 100 day money back guarantees and 2 year warranties to insure confidence while buying as well. For me, it really comes down to the smartphone application which is far above the rest and something I use a lot to come up with new cooking ideas and to control the cooker itself. You can step down to a bluetooth only version from Anova or you can go to a cheap one on Amazon without app support, but for the small amount of money difference for something I use a lot…I don’t see that as worth it.

Once you get started cooking with the sous vide method, you will see that it almost feels like cheating. You get perfectly cooked food every time. 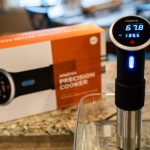 Apple CarPlay vs. Android Auto – Who does car integration better?

Sleep Number Bed Review – How to save...