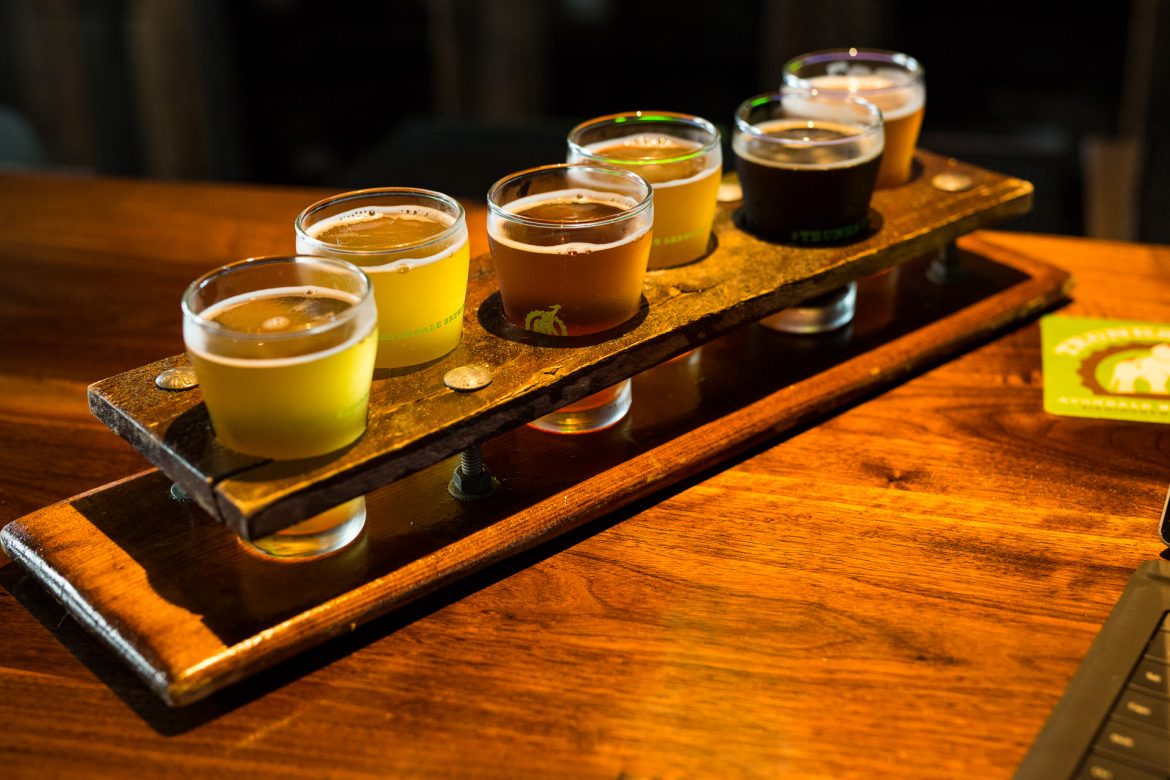 So I was passing back through Birmingham, AL this week and decided to stop by Avondale Brewing on my way to the next stop on the trip. Avondale was awarded the 2015 Best Local Brewery in Birmingham so it had to be worth a try. I have had their Battlefield IPA at several hotels/restaurants around the Alabama area but like most breweries in Alabama…we don’t get them a lot in GA. Beer distribution can be funny that way sometimes. The entire setup is pretty cool. They own multiple buildings that house their offices, bottling/can lines with the fermenters, a huge outside area that is fenced in and of course the taproom. The taproom has blues rock playing for a laid back atmosphere that is fitting of the wood/brick walls and wood L shaped bar. Behind the bar to you get to hear the guys working on brewing beer. They were even hosing it down through a garage door opening right next the main entrance. That is a cool setup as you are sitting right next to some of the process. They did make a new sour bar a really short walk away that just a soft opening yesterday as well (more on this below)

Some shots of the brewing area behind the bar. I went ahead and got a flight which is the 6 beers on the left on the sign above. All of them were solid with my favorite being the Miss Fancy’s which was the Tripel. Since I was in town awhile, I also tried the double IPA since you can’t get it in stores. After that I got a taste of the strawberry Kolsch. It reminded me a lot of the Abita Strawberry but not as sweet which was a good thing. Outside you have a central area with a full stage, bar and a ton of tables. They even have cooling mist like you see at sports stadiums to keep everyone from dying in the heat of the summer. Once you walk through the outside portion and through the gate, there is another bar that shares the building with a burrito sushi place. Yes…sushi burrito’s…it is just as weird as it sounds as I actually ate a spicy tuna burrito there.  The sour bar is completely separate from the rest of the brewery. They keep the bottling/canning/brewing/fermenting separate so they don’t contaminate the rest of their regular brewing process and staple beers. It’s a great idea really and they have the room to do it. As I mentioned before, this just opened with a soft launch yesterday. It’s a small bar with a handful of sour style beers. I tried the lime gose and the Landy which is a sour stout. The Landy was such a limited run that they only had tasting glasses available. According to the bartender, it had been aging for 14 months and there should be another batch coming soon. The lime gose was great but the Landy was pretty damn awesome. I am a sucker for sours that have a lot of taste/body. It’s part of the reason I love Wicked Weed Brewing so much. If they keep down the road they did with the Landy…it will be a really good thing. Overall it was a pretty awesome experience. You get multiple brewery experiences in one without it being really large. The beer was really good but the highlight was the sour bar. It was cool to have that whole separate experience within the same brewery. This one is worth checking out for sure.