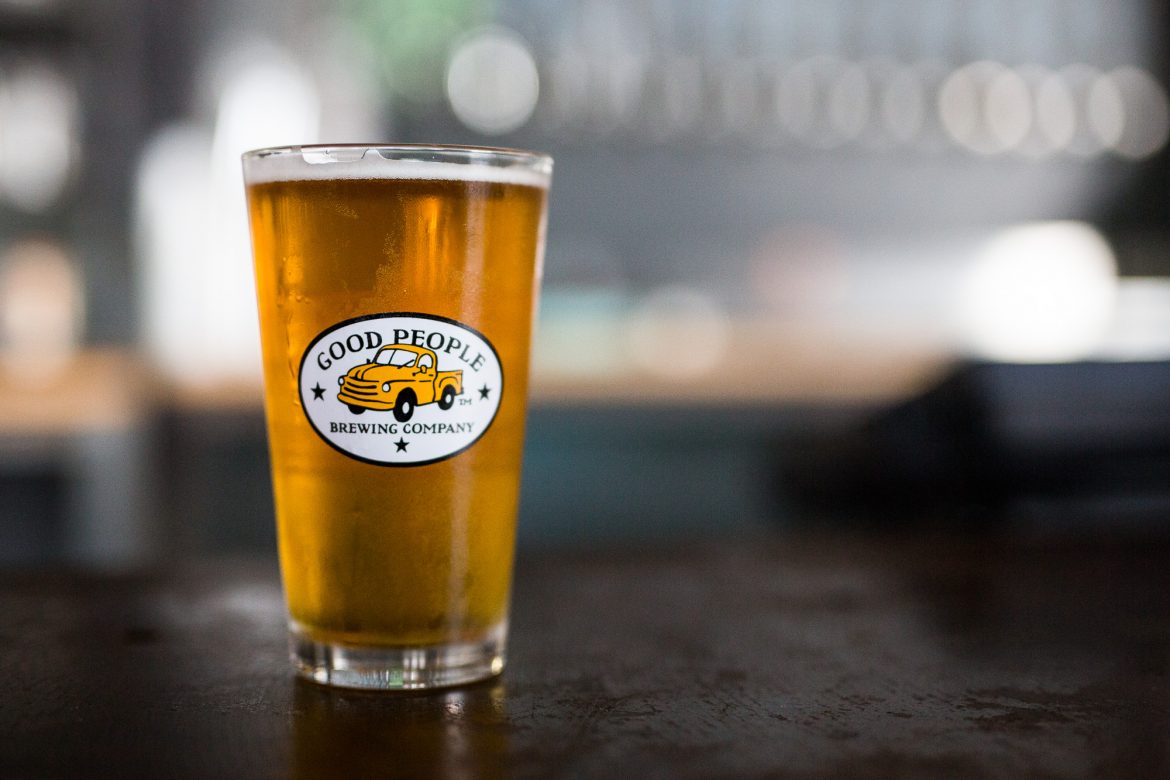 I was in Birmingham, AL on Tuesday so I decided to stop by Good People Brewing. There are only tours on Saturday and Sunday so I sat in the taproom and hung out awhile with a couple of beers. I know it was Tuesday…don’t judge…it was a day that ends in a y!

Good People Brewing seems to be the go to brewery for a local IPA in almost all of Alabama. Being so close in Atlanta, I thought I would see more of it after traveling through AL a lot but it doesn’t really make its way east. After talking to the good people at Good People…they let us know that they are currently distributed in Tennessee, Alabama and the Florida Panhandle. The taproom is in the front of the brewery directly across the street from Regions Field in downtown Birmingham. Just listening to some conversations around the bar, it sounds like they get a lot of walk in business during game times. Just like most taproom setups, there is a long bar inside with an outside area for when the weather is nice. Inside is a cool industrial look that fits the area. They had a couple of special beers you could only get here with all of their standard options on tap with crowlers and growlers available for purchase. They also have a little swag area to hang out and spend some money in. A Big Ass Fan and a cool tribute to the state of Alabama will keep you company.

I started off with the Session IPA. For only being 4.2 abv it had a lot of taste…almost as much as there regular IPA which is simply called IPA. For the second hit I had what they call a Belgian Smash. It’s essentially their pale ale with Belgian yeast. The influence of the yeast is differently there. “Ales from the heart of dixie”

After that I went with the coffee oatmeal stout on nitro. Anything on nitro is always my must have at taprooms for some reason. It is probably because of the limited availability of nitro in most places and breweries love to have it in house and often experiment with happy gas on other styles. The music selection was right on par with my taste. I heard everything from 90’s grunge to Widespread Panic to rock blues (even including some Simple Man from Skynyrd)…great for a Tuesday 5pm chill session at the computer with a beer in hand. From the taproom you get direct view of the actual brewery which is the rest of the warehouse setup. The taproom actually opened in 2011 thanks to some changes in the Alabama laws. The brewery has been in this location since 2010…they were founded in 2006 and sold their first beer (the brown ale) on July 4th of 2008.

Before this location, they were in a small basement space below The Mill in 5 Points. They actually moved in to their current building, which was an old mattress warehouse, before the Birmingham Barons announced their plans to move downtown.

Here is half of the brew setup in the warehouse. Good People actually had a yoga class going on that is on Tuesday nights. 10 bucks and it includes a beer. You can drink it before, during or after. It really looked like they try to have a lot going on during the week to invite locals in to enjoy the space. I will say…it was the first time I have ever been surrounded by yoga mats in a taproom! The bartenders were all like you would expect at a taproom…really knowledgeable about their beer and friendly. They aren’t your regular bartenders when you come to taprooms…they actually love the experience. They don’t mind when you start waving a huge camera around either.

So here are all of the details. I haven’t run into them much outside of Alabama but I would assume they are in Mississippi and the surrounding states after seeing the footprint they have here. Decent beer with a cool vibe that isn’t easy to find in Alabama.